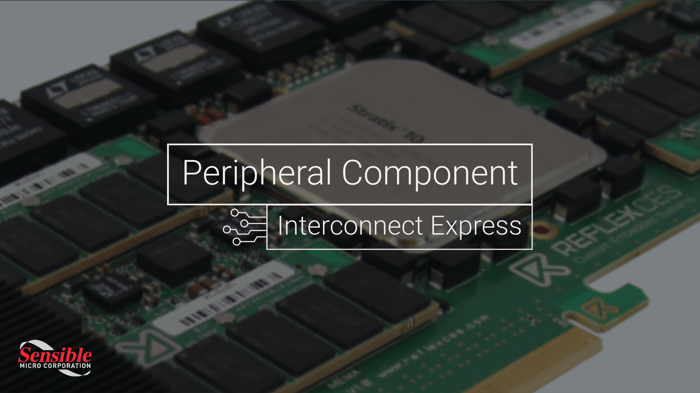 In 2002, as a result of high demand for computing bandwidth, the newest generation of Peripheral Component was introduced to the market. Since then, PCI Express (PCIe) has become the industry standard for internal computer component connections. In this post, we cover Peripheral Component Interconnect Express technology as well as FPGA PCIe boards.

There are many advantages of Peripheral Component Interconnect Express over traditional PCIs. The biggest benefit is that it uses a serial interface instead of a parallel one. The point-to-point serial connections allow for every device to have its own dedicated connection. This means that data can be transferred quickly and accurately and the different devices don’t have to share bandwidth.

Other advantages of Peripheral Component Interconnect Express include:

In order to keep up with the growing demand for faster processing speeds and more bandwidth, updated versions of the original Peripheral Component Interconnect Express have been introduced to the market. With each new release, the transfer rate has been increased, the bandwidth has doubled and new features have been included. The most current version, PCIe 5.0, was released in 2019 and PCIe 6.0 is expected to be released by 2021.

A Field-Programmable Gate Array (FPGA) is a hardware circuit that can be programmed to carry out logical operations. FPGA programming can be a singular, simple logic gate or it can involve more complex functions. Combining FPGA and PCIe on a board results in the following:

In many cases, FPGA PCIe boards are a cost-effective option and they can be used in a wide variety of embedded system applications. Industries supported include, but are not limited to:

Sensible Micro is an authorized distributor for REFLEX CES, a leading FPGA board, module, and embedded systems manufacturer. REFLEX CES’s products are top-of-the-line in both quality and performance and their vast experience in leading-edge FPGA technology has put them at the forefront of the market. Their large roadmap of PCIe boards is based on Intel® or Xilinx® FPGA and the boards can be used in a wide variety of embedded applications.

One of REFLEX CES’s most popular FPGA PCIe boards is the XpressGX S10-FH800G. This full height profile PCIe network processing board features the Intel® Stratix® 10 FPGA with support for up to 800G bandwidth. Target markets for the XpressGX S10-FH800G include security, data center and cloud computing, military & defense, broadcast and video.

The XpressGX S10-FH800G board is supported by the REFLEX CES Toolkit. The toolkit makes getting started with a board faster and easier. Users can quickly configure a design and program the board to test all the available interfaces. The toolkit also generates a complete HDL project, including IP and test modules selected by the user through the graphical interface. Check out the video below for more information:

Schedule a call to speak with one of our application engineers about your PCIe and embedded system needs today!

The bottom line is king in the supply chain, but it takes more than a low price point to protect your budget for electronic ...

5 Things Electronic Component Buyers Should Demand From Their Suppliers

Many companies tolerate the inconvenience of juggling a collection of suppliers and vendors that each excel in different ...

Component procurement is built on trust. You need to know that the components you’re sourcing are authentic, quality ...