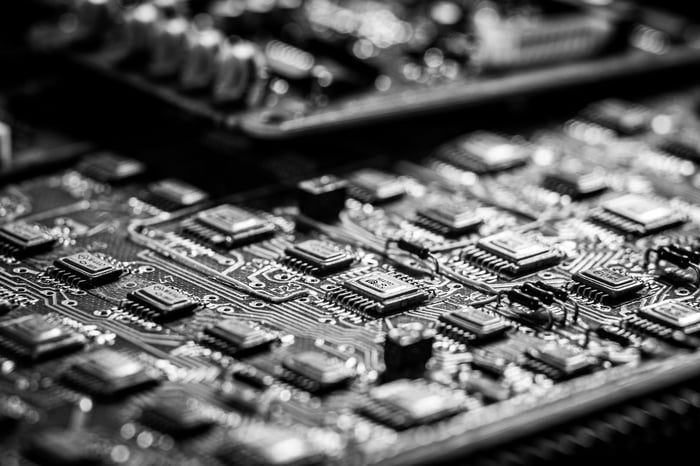 In this month's sensible semiconductor news update, we’ll take a closer look at the contrast between rising chip demand in the industrial and automotive sectors even as sales for consumer goods continue to fall. All the while, the $52 Billion infusion of the CHIPS act promises fresh US manufacturing growth and industry giants like Micro and Texas Instruments are optimistic about the future.

CHIPS Act of 2022 Gives $52 Billion Infusion to US Manufacturing

US President Biden has finally signed the bipartisan CHIPS and Science Act of 2022 into law. This act provides a $52.7 Billion infusion of funds for research, development, manufacturing, and resource development in the US semiconductor industry. Early signs and industry bullishness already suggest that it will reduce dependency on the countries in Asia that currently dominate production.

In 1990, the US produced 37% of the world’s chips. Today, it produces about 12%. Major manufacturers such as Micron are optimistic that the CHIPS Act will restore some of that lost market share.

As a direct response to the signing of the CHIPS Act, Micron has announced a $40 Billion investment in US memory manufacturing — the largest ever — which is estimated to create 40,000 US jobs. A sizable 5,000-job slice of that increase will reportedly include highly paid technical and operational roles. Micron President and CEO Sanjay Mehrotra stated via press release that “This legislation will enable Micron to grow domestic production of memory from less than 2% to up to 10% of the global market in the next decade.”

Texas Instruments Is Positioned to Gain From Shifts in Chip Demand

The automotive and industrial markets continue to be hit hard by a chip shortage that has dragged on for more than two years. The most acute shortages are in analog and power-management ICs — the greatest strength of global powerhouse Texas Instruments. TI has begun reallocating resources to provide relief as other areas of the chip market are trending in the opposite direction.

TI notes a soaring demand for its analog and power-management chips and embedded processors — such as those used in cars — that continues to outstrip the company’s ability to supply them. Sales rose by more than 20% in 2Q22, and the company is short about 65 days worth of inventory from its preferred stock levels. Prices for chips in this sector are also way up, despite often being legacy technology that is generations behind today’s most advanced chips.

On the other hand, TI reports that it sees (and expects to continue seeing) a corresponding weakness on the consumer side of things. Demand for PCs and smartphones has plummeted in the face of economic slowdown, abundant inventory, and the skyrocketing prices of consumer goods. The high appetite for consumers' tech purchases just isn’t meeting the levels from earlier in the pandemic.

Fortunately, internal production at TI is highly “fungible” and able to reallocate resources relatively quickly. Chief Financial Officer Rafael Lizardi told investors on a call that “We do that constantly.” He explained that “at the highest level, we have been adjusting our capacity over the last two months to deploy it to the best uses and support our long-term roadmap.” In the near term, this means moving focus from the weak consumer market to areas where demand is strong, such as automotive.

Sales of ICs and Consumer DRAM Hit By June Swoon

Dating back to 1976, this June marked the first time the IC market had ever recorded a June sequential sales decline. Single or even double-digit sales gains are the pattern for at least two reasons.

Why was this year different? A steep drop in memory pricing and sales was the biggest culprit. Economic concerns related to high inflation, continuing supply chain woes, and piled-up inventory all contributed to this market weakness. Current indications suggest that 3Q and 4Q sales will also fall short of typical levels.

Consumer DRAM prices, too, have declined. The initial estimate of an 8-13% price drop turned into real quarterly declines of 13-18% in 3Q. Korean manufacturers are not the only ones slashing prices, since other suppliers now have no choice but to join in on the zealous price cuts. The possibility of a sustained decline is real, and the expectation for 4Q is another 3-8% dip in the price of consumer DRAM.

Stay informed with Sensible Micro and get the tips you need to prepare for anticipated shifts in demand, inventory, and chip prices as well as the real-world impact of the CHIPS Act.