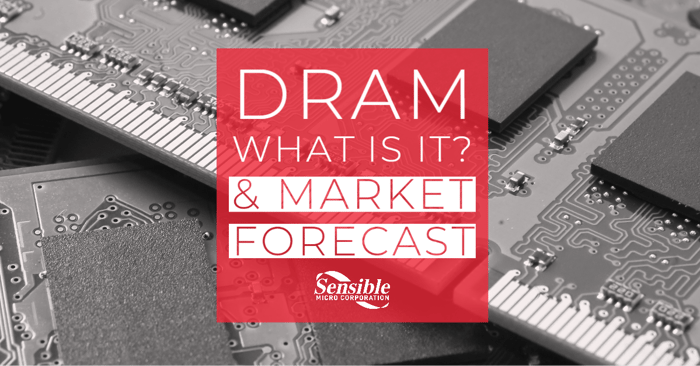 DRAM: What is it? & Market Forecast

The DRAM market has been on the rise since the end of 2018, with the global adoption of memory ICs and microcontrollers in automotive electronics and consumer devices. Because DRAM is low in cost and top in performance, the demand for it is incredibly high.

In 2019, the market was valued at around $80B USD and it is expected to reach around $110B USD by 2025. Growth at that speed will equate to a CAGR of 5.44% over the next 5 years. The technical advances of smartphones and other mobile, personal electronics, such as wearable devices, have been driving the market. DRAM is expected to continue to grow beyond personal devices and be more widely used in cloud, servers, and automotive applications. As the use-cases become more diverse and widespread, so will the market.

Another major market driver is the adoption of 5G technology. Though being relatively new, 5G technology and wireless communication overall have already started to impact the market. Some of the major industry players have started to invest in advanced DRAM in response to 5G technology. For example, late last month, Samsung Electronics released the industry’s first 8GB LPDDR5 DRAM, specifically created for AI-powered mobile devices and 5G.

More DRAM competitors have entered the market since demand has picked up. The current key players include manufacturers such as Samsung Electronics, Winbond, and Intel. These competitors are fighting for market share and because they’re always on the cutting edge of innovation, they’re heavily investing in R&D, giving them more of a competitive advantage.

While DRAM is a hot topic in the electronic and tech industries and has impacted the global market, most don’t know exactly what it is or much about it. Below we lay out the basics and must-knows of DRAM.

Dynamic Random Access Memory (DRAM) is a type of semiconductor memory. It is a temporary, volatile memory and is the current standard for both main and random access memory.  It’s the most common technology used in main memory because of its small size, speed, and access abilities. DRAM requires power to retain data, which is why it is classified as volatile, and is bit-alterable, meaning new data can directly overwrite existing stored information without needing to be manually erased. It’s also bit-addressable, which allows for access to individual data bits. These bit capabilities act as major speed advantages.

DRAM is considered ‘dynamic’ because of its slow discharge of the capacitor and ‘random access’ because it takes the same amount of time to reach any memory address. DRAM has a one capacitor-one transistor design that allows for a lot of memory cells to be packed into a small area. A single memory chip can hold billions of DRAM cells. Because of its size, DRAM is perfect for achieving high-density and high-storage capacity.

Though DRAM is a popular type of random access memory and its demand is steadily increasing, it has its downsides and is not perfect for every application.

The advantages of DRAM include, but are not limited to:

Its disadvantages include, but are not limited to:

There are a variety of different types of DRAM, each serving a specific purpose. The 6 main types are listed below.

1.  Asynchronous DRAM: This is the basic type of DRAM and all other types are based on this one

2. FPM DRAM: Fast Page Mode DRAM is designed to run faster than the other convention types of DRAM

3. EDO DRAM: Extended Data Out DRAM is sometimes referred to as Hyper Page Model because it provides a performance increase over FPM DRAM

5. SDRAM: Synchronous DRAM is notably faster than the other types of RAM and DRAM as it is synchronized with the clock speed a microprocessor is optimized for

6. RDRAM: Rambus DRAM was developed specifically by Rambus Inc. It is a competitor to SDRAM and can operate at increased speeds

What is DRAM used for?

As technology advances and new devices emerge, the applications for DRAM have become more vast. Here are some of the most common-

Though personal and consumer devices are still the most common applications for DRAM, different use-cases, such as automotive electronics, are starting to become more prominent.

As demand increases, DRAM and its subtypes may become harder to source. Sensible Micro has a reliable network of suppliers and can source a wide variety of electronic components, including all types of memory. We are also able to provide our customers with customized stocking and scheduling packages and our on-site component testing and inspection lab ensures quality shipments every time. Need DRAM? Speak to one of our sourcing experts today!