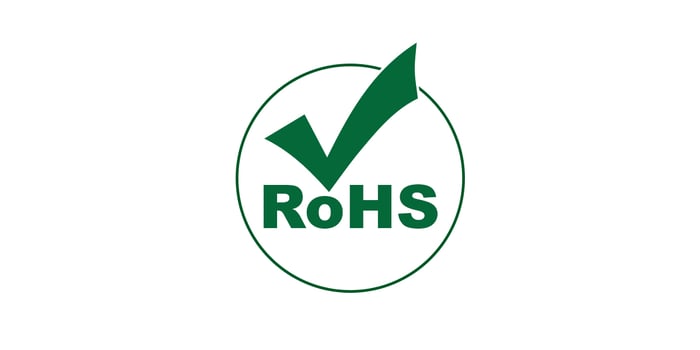 Earlier this week, July 22, 2019, EU RoHS 3 was implemented. The Restriction of Hazardous Substances directive, commonly referred to as RoHS or Directive 2002/95/EC, is a European Union legislation that prohibits the use of certain dangerous substances found in electrical and electronic equipment (EEE). Substances, including the chemical elements mercury, lead and cadmium, have been restricted to protect not only people from occupational exposure but also to help with preservative environmental efforts. The original RoHS was enacted July 1, 2006, and has been strictly enforced ever since.

With the most updated version of the directive now in full effect, conformity and compliance will be mandatory for all applicable companies participating in the EU market. Below is a digestible break-down of the various aspects of RoHS 1-3, covering topics such as enforcement, exemptions and comparisons to other similar regulatory laws.

RoHS was enacted July 1, 2006, and all products in the EU market from that point on must pass a RoHS compliance screening. RoHS was revamped into RoHS 2, published July, 2011, by the European Commission. It formally replaced the original directive on January 3, 2013. RoHS 2 was different from the first version because it expanded coverage to all electrical/electronic equipment, cables, and spare parts as well as to medical devices (category 8) and monitoring & control instruments (category 9), both of which were applied and enforced in 2014. In continuation, coverage of RoHS 2 expanded again to include Virto medical devices in 2016 and industrial monitoring & control instruments in 2017. Most recently, as of July 22, 2019, coverage of category 11 products was put into effect and includes “all other electrical and electronic equipment.” This newest iteration is called RoHS 3.

EU RoHS 3 was published June 4, 2015, by the EU commission. It was created to add four new hazardous substances, all of them phthalates, as an amendment to Annex II to RoHS 2. It also provides coverage of Category 11 products.

The restricted phthalates are DEHP, BBP, CBP, and DIBP. Phthalates are the most frequently used plasticisers in the world. They are used in a wide array of items, such as automotive plastics, vinyl flooring, and even raincoats.

On July 22, 2019, RoHS 3 was put into effect and now all electrical and electronic equipment on the EU market must act in accordance with the new restrictions. Imposition of the RoHS 3 regulations on medical devices and monitoring & controls instruments from categories 8 and 9 will go into effect on July 22, 2021.

EU RoHS covers many industries and types of products, many of which are consumer goods. The categories of EEE covered by RoHS include…

Any company that sells, distributes or makes applicable EEE products or parts directly to EU countries and/or on the EU market is affected by RoHS regulations and must comply. As this regulation has become more expansive, and as other similar regulations have been created worldwide, RoHS no longer applies to just EU countries.

Compliance is mandatory, enforcement is strict and the consequences are serious. Repercussions include being fined, performing mandated large-scale product recalls at company expense, and even possible incarceration depending on the severity of the nonconformity.

When a product fails RoHS screening or is deemed dangerous, a RAPEX alert is triggered and made public. RAPEX stands for Rapid Alert System for Non-food Products and alerts are put out via the Safety Gate rapid alert system.

The Safety Gate rapid alert system allows for timely notification about a product in question between EU and EEA members and the European Commission. These alerts are continuously updated and the amount of notifications has noticeably increased, leaving one to correctly assume that The EU is meticulously monitoring the market and demands compliance.

The RoHS scope has expanded over the years and, with that, the number of exemptions has increased, too. Exemptions can be removed, changed, or sometimes even expanded but many have an expiration date and are reviewed at least every 4 years. Despite this, exemptions to RoHS regulations are still very limited and are only granted when absolutely necessary, usually for two reasons.

The first reason is when there is not a viable alternative to a restricted substance. The second is when substitutes are proven to be worse for the environment than the restricted ones. Even when permitted, exemptions are only temporary and a safer alternative is always sought out.

Comparison Between REACH and RoHS:

REACH stands for Registration, Evaluation, Authorisation and Restriction of Chemicals. It’s an EU regulation that aims to protect people and the environment from chemicals while also making the EU chemical industry more competitive. It’s predominantly enforced by the ECHA, the European Chemicals Agency, which is an agency of the European Union.

Though REACH is very similar to RoHS 3 and the two regulations do overlap, there are some differences between them. REACH is described as a horizontal legislation, meaning it covers all applicable industries throughout the entire life cycle of the chemical substances in question. RoHS is a vertical legislation that is product specific and focuses on hazardous substances in EEE.

As a result of the regulations’ coverage overlap, the EU published a Common Understanding paper, stating that the two regulations are “complementary” and that “The Commission and the co-legislator [want] both pieces of legislation to work together and [have] decided they should apply without prejudice to each other.” With RoHS 3 now officially in effect, manufacturers are to give priority to RoHS regulations over REACH as much as possible for EEE when the two overlap.

We, here at Sensible Micro, have the testing capabilities to ensure that applicable products are RoHS compliant with our XRF analyzer.

How to Vet New Suppliers When Sourcing Electronic Components

The recycling of electronic components is essential to sustainable manufacturing in the semiconductor industry. However, it ...

The Importance of Quality Assurance Certifications in the Supply Chain

Quality assurance has taken on even greater importance in the electronic components supply chain over the last few years. ...