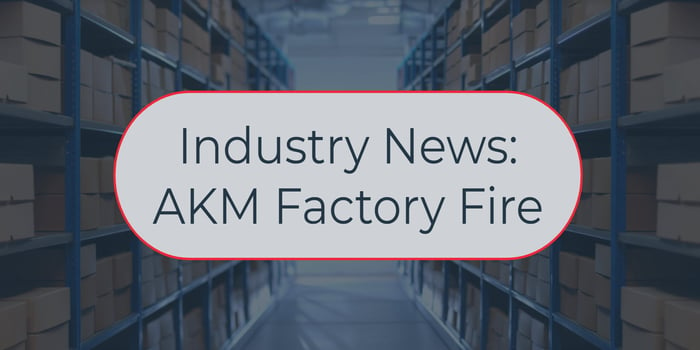 On Tuesday, October 20th, a fire broke out at the AKM Semiconductor factory in Nobeoka-shi, Japan. AKM Semiconductor, a subsidiary of Asahi Kasei Microdevices (AKM), is known for its IC manufacturing, specifically for its production of high-end DACs/ADCs IC components used in superior audio devices. The Nobeoka plant was also the only fab manufacturer under the AKM Group.

The fire caused a tremendous amount of damage and is reportedly worse than others that have occurred in the industry, such as those that happened at the Samsung and Toshiba chip factories earlier this year. It took over three days, approximately 82 hours, to completely extinguish the fire. It is expected that it will take a minimum of six months to fully recover and restore production.

As a result of the fire, all production at AKM’s Nobeokai facility has stopped. In efforts to meet market demand, AKM Group has said they will be outsourcing more production than they previously have.

While it appears that the overall IC market will be okay and not face any unrecoverable disruption, price increases and shortages are expected. Companies that currently use AKM sensors, chips, and other electronic components have already begun to purchase any and all available stock in efforts of preventing potential shortages in the future.

Millennia Media, a high-end pro-audio company, was one of the many companies that had major products designed around AKM’s chips. John La Grou, CEO of Millennia Media, was quoted saying,

“Of course, all AKM audio parts immediately disappeared from front-line distributors [such as] Digikey, Mouser, etc. And now the after-market brokers are selling AKM parts at horrific mark-ups. We saw one $5 AKM part being offered at $110 each.”

However, on a more positive note, La Grou also noted that

“There’s a rumor that AKM will pivot their IC masks to independent fab houses, so perhaps we’ll see some AKM devices before the main plant is again operational.”

Get in touch with a sourcing expert today to discuss your sourcing needs. Stay on top of the latest developments in the industry by subscribing to the Sensible Micro blog today.

Sensible Micro COVID-19 Statement:  At Sensible Micro, the health and safety of our customers, employees and community are ...

In 2002, as a result of high demand for computing bandwidth, the newest generation of Peripheral Component was introduced to ...