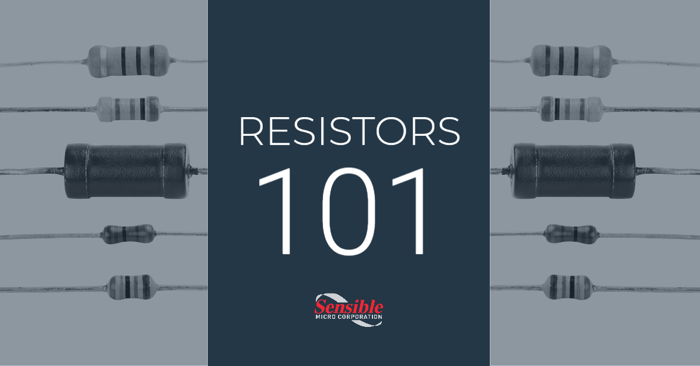 Resistors 101: Types of Resistors and their Functions

Resistors are everywhere in electrical devices. These simple passive components have a huge impact when it comes to circuit design. They come in many different varieties and have a wide range of functions. As apparent from their names, the resistor’s primary function is to provide resistance against an electrical current. Other functions of resistors include:

Determining the right type of resistor for a project or design depends on multiple factors that need to be planned ahead of time before sourcing resistors for large-scale production. An engineer needs to be aware of the following factors when selecting a type of resistor:

Resistors come in a variety of different types with their own ratings and sizes. When designing a circuit, it will help to know the advantages and unique functions of each variety of resistors.

Linear resistors react in accordance with Ohm’s Law. These resistors will change value through direct proportion to the applied voltage and temperature. Typically, linear resistors are broken down into two categories: fixed resistors and variable resistors.

Carbon Composition Resistors: This type of resistor is one of the oldest types of components on the market. These were commonly used up until the 1960s and are characteristically made from a mixture of powdered carbon and ceramic. Although there are still carbon composition resistors available on the market, they are generally more expensive and less used because other types of fixed resistors have more efficient specs like tolerance, voltage dependence, and stress thresholds.

Wire Wound Resistors: These resistors are constructed with an insulated metal wire wound around a core of non-conductive material like ceramic, plastic, or glass. The metal wires usually consist of highly resistant alloys like nichrome or manganin. These resistors also date back to the turn of the century, but unlike carbon composition resistors they are still widely used today. They are able to resist high power applications, are stable under high temperatures, and provide long-term stability. However, they tend to be more costly and can’t be applied in high-frequency devices.

Thin Film Resistors: These come in two varieties, carbon film resistors and metal film resistors, but have nearly identical constructions. They consist of a ceramic core surrounded by a thin resistive layer of carbon or metal film. Thin film resistors are ideal for use in applications that need high stability, high precision, and low noise like use in medical devices, audio equipment, and testing and measuring devices

Thick Film Resistors: These fixed resistors are most commonly used in consumer devices. They are constructed like thin-film resistors but, as the name indicates, use thick films of metal oxides or cermet oxides. These types of resistors are the lowest cost and most available to source. Typically they are used in any electrical device that uses a battery or AC power source.

Fusible Resistors: These resistors serve two distinct functions: providing resistance against an electrical current and acting as a fuse to break a current if it overloads. Fusible resistors work to not only regulate current, but also act as a failsafe in the case of a power surge. They are constructed similarly to wire wound resistors and are commonly used in expensive electronic devices like TV sets, amplifiers, and safety monitoring and managing equipment.

Unlike fixed resistors, the resistance values of these components can be manipulated through a dial, knob, or screw. Since they are able to control voltage and currents, they’re commonly used in radio and audio equipment. The common types of variable resistors include:

Potentiometers: These resistors are commonly controlled through a dial or knob. They consist of three terminals, with the resistance value regulated by a moving contact (aka a wiper) that is connected to a control shaft. Twisting the control shaft will increase or decrease the voltage across the resistor. They are commonly used in audio/visual equipment and in transducers.

Varistor Resistors: These types of resistors are made of semiconductor materials like silicon and ceramic metal-oxides. The resistance value of these resistors varies along with the applied voltage of a circuit. Varistors are able to withstand high applications of DC voltage and are often used as a transient voltage suppressor in telecommunication lines, radio communication devices, and in power strips.

Photo Resistor or LDR (Light Dependent Resistors): As the name indicates, the resistance value of these resistors varies with exposure to light. These resistors are used in light sensors and measurement equipment, in consumer appliances, and in photography equipment.

Surface Mount Resistors (SMDs): Also referred to as chip resistors, these resistors are mounted directly into PCBs, unlike other types of resistors that are usually mounted with the through-hole method. This allows for speedier production and saves space on a circuit board. They are used mostly in the production of computing equipment as well as other technology.

With a wide range of types and applications, when companies need a steady source of resistors, it is best to go with a company that can stock and schedule delivery. Sensible Micro has access to a reliable network of suppliers for micro components, including all types of resistors. We pride ourselves on securing our customers high quality components as well as minimizing lead times on all our orders. Our stocked inventory is kept in a temperature-controlled warehouse and each outgoing shipment is inspected in our in-house inspection and testing lab for quality assurance. Need resistors? Contact one of our sourcing experts today.

Stay on top of the latest developments in the industry by subscribing to the Sensible Micro blog today!