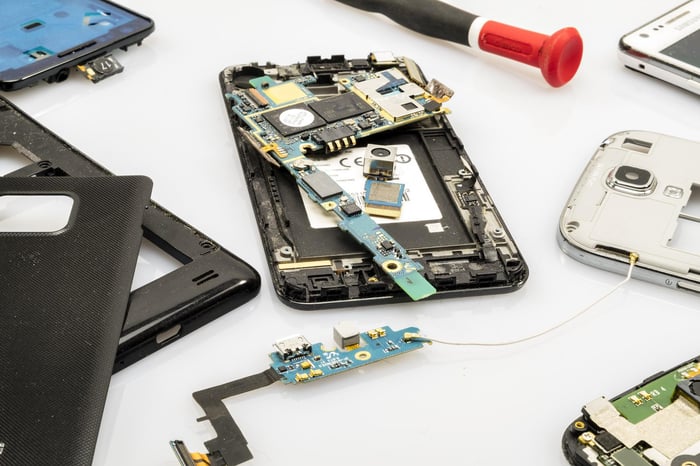 In this month's sensible semiconductor news update, we’ll zoom in on an exciting new family of Bluetooth LE MCUs from TI, New York state’s landmark “Righ to Repair” bill for electronics, and the reported alliance between STMicro and GlobalFoundries on a French factory venture.

The latest Bluetooth LE MCUs from TI don’t even need 1 µA of standby power…and have a starting price of less than a dollar. That’s a welcome 40% reduction in power at only half the cost of similar MCUs.

The result? This new family of wireless MCUs within Texas Instruments’ connectivity portfolio will make Bluetooth LE (BLE) easier than ever to add to next-gen Internet of Things (IoT) devices. Coupled with other areas of improvement, such as additional on-chip flash memory, the possibilities become very enticing.

Wireless MCUs are already a battleground in the chip market. Infineon, NXP, Silicon Labs, and others are all in a tug-of-ware for market share, and global BLE shipments are already set to rise from 5.2 billion units to 7+ billion from 2022 to 2026. The affordability of TI’s new devices adds incredible flexibility, allowing developers to include Bluetooth LE in “any application that also requires a very aggressive price point,” according to Marian Kost, VP and GM of connectivity at TI.

Businesses involved with industrial, medical, automotive, and consumer devices will appreciate the prolonged battery life of TI’s new MCUs, which will allow devices to last up to a decade in ultra-low power wireless sensors on just a coin-cell battery. You can get started with the CC2340 wireless MCUs by requesting samples as well as a development kit priced at $39. They’re scheduled to be in volume production by the first half of 2023, starting at $0.79 in 1,000-unit quantities.

The digital “fair repair act,” New York Senate Bill S4104A, has just passed in New York and is awaiting the governor’s signature. This is huge news for original equipment manufacturers, consumers, and components distributors alike. The law — the first of its kind in the U.S. — asserts the right of users to freely repair the electronic product(s) they purchase, including access to the original spare parts and tools they’ll need to repair the device at fair market condition.

What’s most interesting is that the law is likely to impact areas well beyond the borders of New York state. Since manufacturers who sell goods in New York (as many major brands do) are required to make repair manuals available, it’s likely they’ll quickly become available around the world. It will make invasive software measures impractical (how would do you do this only for New York state?), which could lead to broad changes in how electronics are designed and maintained.

Suppliers, distributors, and repair shops will soon be stocking up on original spare parts. Governor Kathy Hochul is expected to support the measure, which will take effect one year after it passes into law.

We’ve reported previously on Intel’s move into the foundry space, expanding its vertical and control over its supply chain. GlobalFoundries and STMicro aren’t taking this sitting down. The two giants are said to be in talks to build a semiconductor factory in France with the help of government funds.

This is one of the early returns on the European Comission’s ambition to produce 20% of the world’s chips by 2030. A Bloomberg report suggests that STMicro and GlobalFoundries intend to take advantage of this new push, but that no final decision has been made. The project would reportedly focus on developing energy efficient chips with advanced technology. Neither company has a comment on “speculation” about this project, but STMicro did say that it “welcomes the continued work by public authorities to help the semiconductor industry continue to innovate with various strategic support instruments.”

Stay informed with Sensible Micro and get the tips you need to prepare for coming changes in the demand for original components and Bluetooth LE MCUs.

The recycling of electronic components is essential to sustainable manufacturing in the semiconductor industry. However, it ...

The worst of the pandemic-induced shortages may be behind us, but the industry will still feel the effects of these ...

There are encouraging signs of an industry emerging from the worst of the disruptions over the past two years. However, the ...